A short while ago, Julien – a much loved and longstanding family friend sadly passed away after a long battle with illness. As a result of that sad ritual division of a deceased’s personal belongings, I found myself in possession of a fairly complete backpacking and camping kit. It was important to me that I would put this to good use, and follow through with my recent personal promise to seek more adventurous experiences in the outdoors – born in no small part from reading Alastair Humphrey’s excellent MicroAdventures blog.

So after a week or so of vague planning and gathering the remaining stuff I thought I’d need, I found myself at 5:30 on a Monday evening – predictably late and flustered, doing one of those weird half-jog things where you’re basically just walking quickly – bumbling to the train station with a massive backpack in a panic, having forgotten to pack half of the stuff I’d bought.

My plan was as follows: Take the train from Cardiff  to Pontyclun, and follow the public footpath from the train station, up through Coed Trecastell and out to the fields on the other side. Once there, I would leisurely set up a basic (but beautiful in its efficiency and practicality) wild campsite, and enjoy the sunset before knuckling down to a fine evening outdoors in front of a roaring wood fire (effortlessly cultivated from the nearby wood). Perhaps I’d read some of my book, ‘find myself’, and maybe even write a few inspired bits of poetry. Who knows? The earth was mine.

Of course, thats not how things actually happen.

While on the train I realised that I’d forgotten any and all fire-starting equipment except a cheap plastic lighter, but figured a single copy of the Metro that I’d taken from the seat behind me would be plenty to be getting on with. Straight from the station I took the wrong fucking turn because I’d forgotten to buy a compass to follow my map with, but decided that was no problem, I could navigate easily enough by simply looking at the sun. 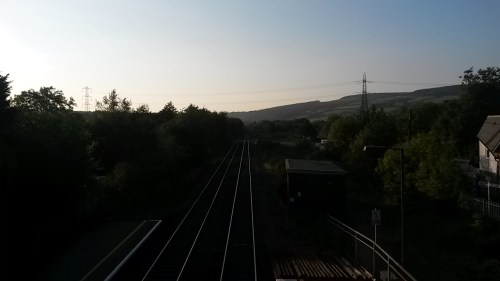 After staring in dismay at the sun for a bit, I downloaded the ‘Compass’ app for my phone – and I was away… 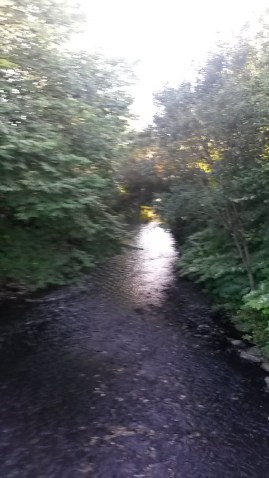 …bounding through the woodland… 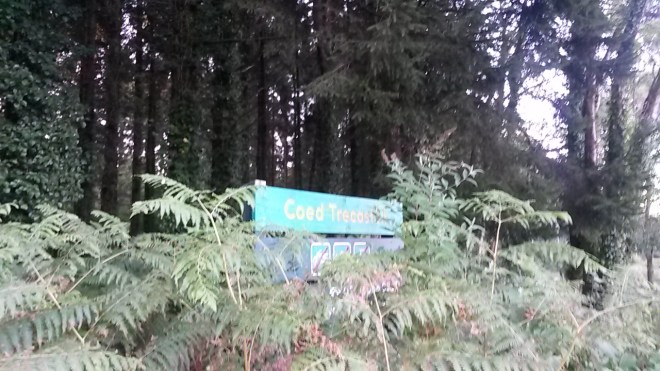 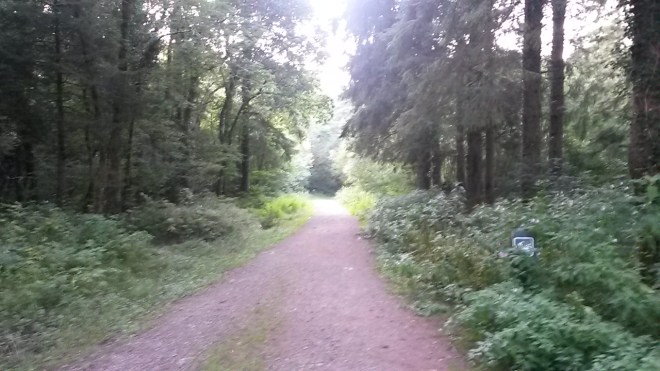 And here’s where things started to veer away from the idyllic escapade in my head, and more towards my usual mode of operation: doing things a bit wrong and assuming it’ll all just be fine anyway.

I’d managed to miss the turning that led up the hill through the woods, and was now following a seemingly endless path that followed parallel to the train line, without rising any higher up the hill. In a moment that probably saved my evening, I stopped at a log pile and collected a bag full of small logs in case I had trouble finding any later on. 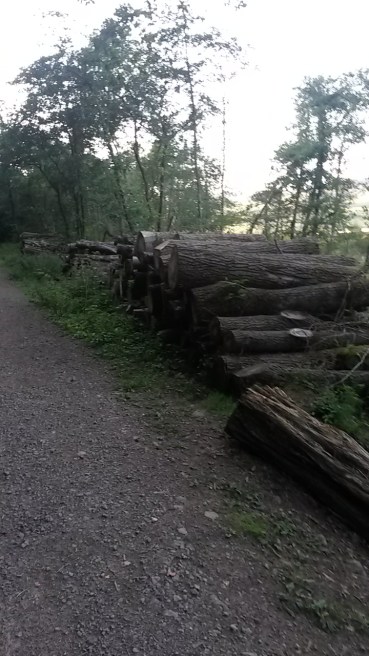 After nearly half an hour of following this (wrong) path, I came to a good ol’ trusty fence with a stile. To my left there was a tiny muddy path that led directly into a tree, while beyond the stile there was a stream that seemingly led nowhere.

I decided to cross the stile (mainly because stiles are fucking cool) and explore the stream, eventually having to do a dizzying, death-defying leap to reach the other side. 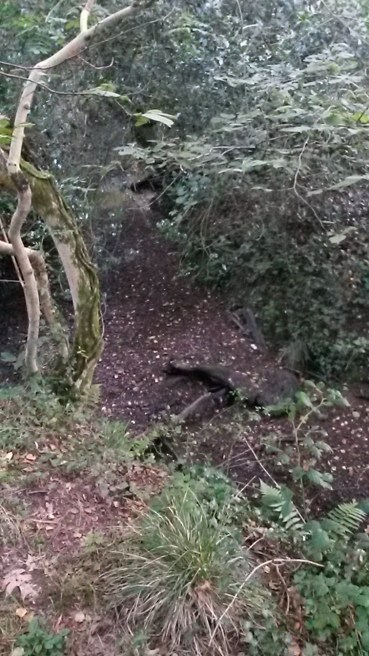 Beyond the stream and the Attacking Death Bush that surrounded it, I found a fence, and a field. Excellent. This would be where I left the woods and followed the field up the hill, to find my perfect camping spot. The fountain of youth would probably be there too right?

After a leaving a pointless sculpture to mark my entry point to woods, I jumped the fence and immediately sank into half a foot of watery bog. The whole field was pretty much waterlogged, though hard to tell because of how long the grass was. I waded to the top of the field, and the gate that led to the adjoining one only to find my way blocked by a massive farmhouse, and a field full of murderous cows. They dropped their knives and cigarettes to turn and stare at me with the icy intent that only the coldest of killers can muster. This was not how I wanted to die, so I turned back. 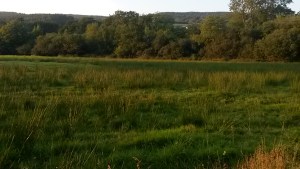 The sun was starting to get dangerously low in the sky, and I realised that I was actually running out of time to find somewhere decent enough to camp for the evening. Up until this point I’d found my inability to follow a map and its subsequent non-catastrophes charming and endearing, but now it was beginning to dawn on me that I might not be able to find somewhere proper to camp, and may even have to consider turning back and catching the train home or spend a night slowly developing trench foot in a waterlogged field.

I hopped the fence and the stream again to revisit the little mud path by the stile, and found that it was actually leading in the direction that I had originally wanted to go. I decided that I would simply have to take the plunge, and follow this trail in the hope that it would lead me to somewhere suitable to set up for the evening – before it got too dark to see where I was going. So I trudged onwards.

Any sight of meandering deer, graceful foxes, perhaps even an industrious badger that I may have hoped for was ruined by basically sprinting through the woods, with a backpack full of clanging camping pots, and a plastic bag full of firewood in one hand and four cans of cheap cider in the other hand.

After fifteen minutes or so of full-pelt, action-marching, I found myself emerging into a small clearing. Too small and enclosed to be where I wanted to camp, but a good place to hide my stuff while I jogged on ahead to see if there was anything promising. 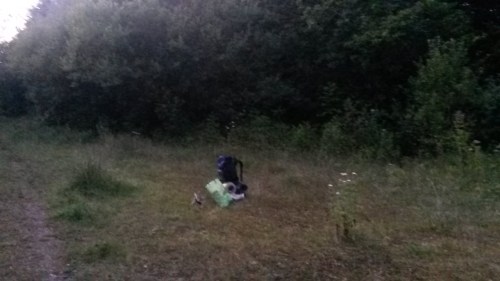 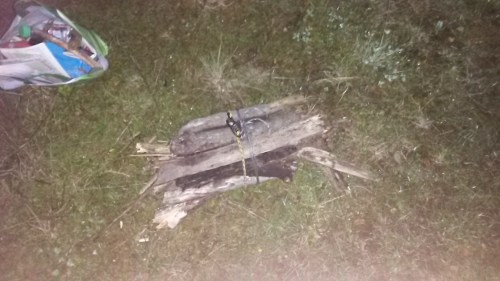 I ploughed on ahead and came out onto a small country road. On either side of it were promising looking fields, however only one was empty of cows or sheep, containing showjumping hurdles instead. I went back to get my bags and began to climb through a small opening through the thicket into the field before I hear the sound of approaching cars. I jump behind the gap where I entered the field and hide myself inside a bush. Lo and behold, two cars with horse trailers pull up, and out pop a group of ladies and their two horses to use the field. Within seconds it is already too late and too weird to simply climb out and announce my presence. So I settled down to wait out one of the strangest, most uncomfortable half hours of my life – watching teenage strangers showjumping in the sunset, while I leer at them from inside a bush, like the swamp creep that I am.

Finally they left, but the sun had already pretty much disappeared completely. I emerged from my vortex of personal shame, only to discover that the grass in this field was again much too long and wet to spend a night amongst without being thoroughly soaked.

By now it was fully dark and my options were spent, and I returned to the clearing where I’d left my bags before, as the ground was dry for the most part and the grass was short enough to not be a problem. As I unpacked my things and began to prepare my fire, I made a particularly stupid mistake that could have plunged my already unsuccessful night into total misery: I put my copy of The Metro on the damp grass. I quickly realised my folly, but a lot of the damage was done, and the paper was soggy.

Armed with only a cheap lighter and a sodden newspaper, I proceeded to spend over an hour trying to get my twisted fire started. This was the low part of the evening. Everything else that had happened was sort of funny and interesting, but it was starting to get cold, and the thought of this night ending early with me hunched in total darkness without a fire to keep me company was starting to get me down. In one last gasp attempt, I bunched all of the remaining newspaper up in defiance and managed to finally get enough burning to ignite a couple of the bigger logs. 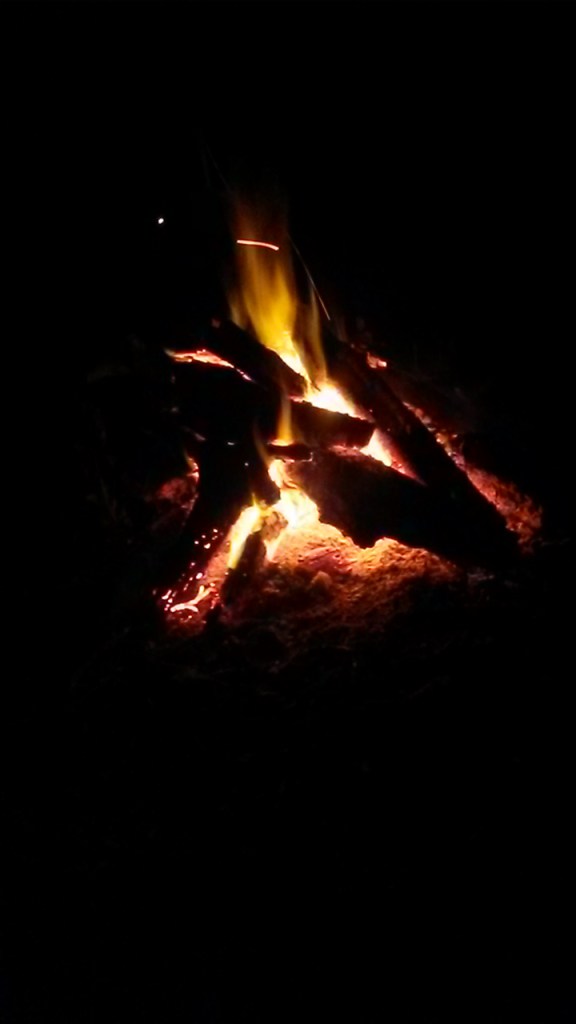 From there on out, the rest of the evening was as enjoyable a night as I’ve ever had. I immediately sank a can of cider down my gullet to calm me down a little, enjoyed a modest meal stove-cooked soup, and simply relaxed and watched the fire for a few hours, reflecting on the experience I’d had so far while I listened to the song of the woods around me.

After a good few hours sipping cider and kicking back, I put out the fire and climbed into my bivvy bag (a waterproof bag that goes around your sleeping bag) and hit the hay. Because I’d had a couple of drinks, and exhausted myself charging around the woods, I fell asleep with ease – something I hadn’t expected to be able to do. A few hours later though, I did wake with a start after a lovely dream of a gang of foxes with glowing red eyes ripping my throat out with their teeth… 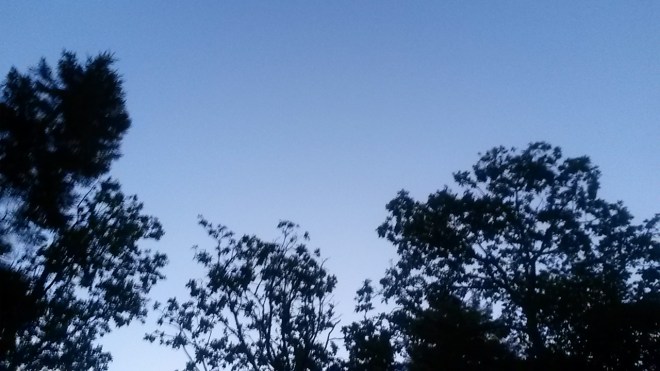 As dawn broke around 6:15am, I woke naturally to a chorus of birds in the trees around me. Despite the early hour and the interrupted sleep, this was probably the most awake and fresh I’ve ever been in the morning, and I was immediately up and about, preparing breakfast: green tea and one of those horrible (amazing) all day breakfast in a tin things. 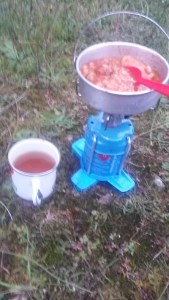 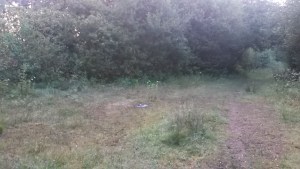 Packing up my stuff was a breeze, and this is where I noticed the real benefit of camping without a tent. Leaving only a patch of ash from the fire, I set off back down the forest path, on probably the best morning commute of my life. 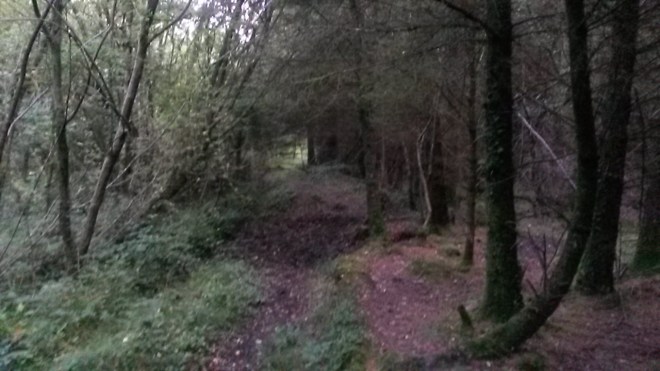 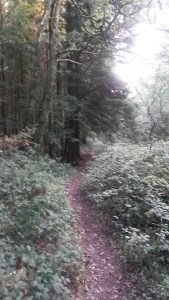 Instead of rushing through the woods like I’d done the evening before, I was able to take my time and enjoy the surrounding woodland, which was particularly nice in the morning light. 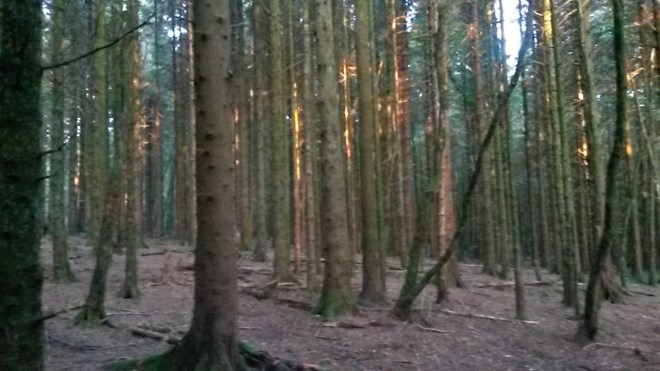 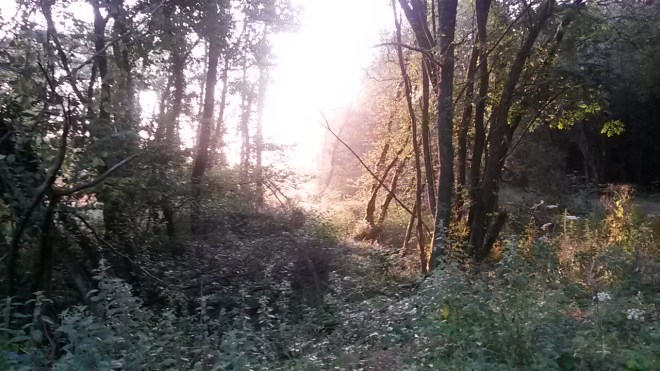 I also found the path that I should have taken in the first place, which was fucking glaringly obvious. I still have no idea how I missed it. 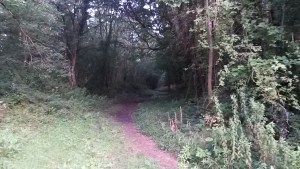 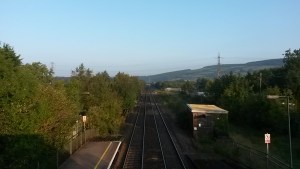 As I reached the train station I found myself surrounded by commuters on their way into Cardiff to start their day’s work. Needless to say I stuck out like a sore thumb; covered in mud, stinking of smoke at 8am on a Tuesday morning – sitting amongst their misery with a big fat grin on my face. I even had time to shower before work.

One thought on Creepin’ – Coed Trecastell